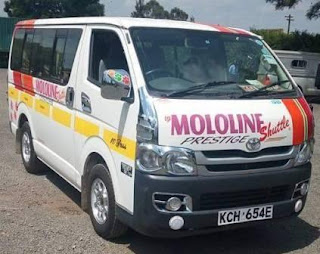 MoloLine Is the most reputable shuttle company which runs services from Nakuru to other towns in Kenya, leaving when full from opposite the old Odeon cinema. There are 10 seats, usually with belts, and drivers tend to stick to the speed limit. This prestige shuttle service goes to Nairobi, Eldoret and Kisumu.

Kariuki is the chairperson of the MoloLine services, which was formed in 1994 with a vision of bringing order in the industry. MoloLine started services in Nakuru main bus terminal in 1995. Its first aim was to transform the attitude of commuters and other stakeholders.

So in 2004, MoloLine rolled out its prestige shuttle. To avoid competition from 14-seaters as witnessed earlier, they set up offices at highway towers along Nakuru-Nairobi highway in Nakuru town away from the bus park.

The luxury shuttle vehicles have spacious comfortable seats because the number of seats has been reduced compared to the normal matatus.

Furthermore, as a way of ensuring that every passenger is comfortable, a socket from which one can charge a mobile phone or laptop has been provided per seat as well as a switch which a passenger can press to alert the driver after reaching the desired destination.